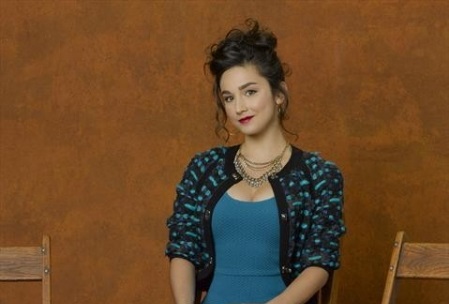 Molly Ephraim is an American actress who has appeared in films, on television and in Broadway, off-Broadway and regional theatre productions.
She is best known for playing the role of Wendy Greenhut in the 2008 film College Road Trip, and the daughter, Ali, in Paranormal Activity 2 (2010).
She currently plays Mandy Baxter in the ABC sitcom Last Man Standing, which premiered on October 11, 2011.

The star of "Paranormal Activity 2 " and ABC's "Last Man Standing " chats with our Cris Jiu. 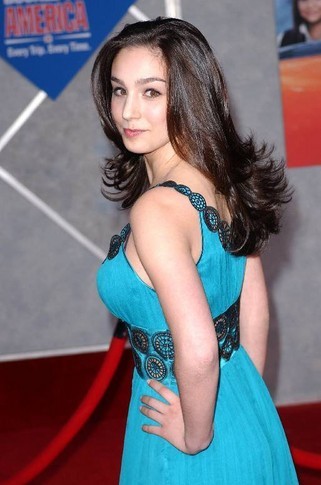 C.J.   We all saw you in "Paranormal Activity 2" and you were very convincing in your role. Were you just acting or were you really scared?
Molly Ephraim  I was only acting for the most part, but there were definitely some scary moments on set! There would be sounds and noises and that freaked me out a little. I knew there were people all around the set and it was daytime but I would still get a little scared when I heard the noises.
C.J.  Would you consider yourself a fan of scary movies, because I heard you hate them?
Molly  I wouldn't say I hate them. I wouldn't say that at all. If I hated them, I wouldn't have done the second "Paranormal Activity" film. I'm saying I'm a scardy cat and tend to distance myself from watching them. So no, not really a fan of the scary movie genre!
C.J.  Before doing "Paranormal 2", had you seen the first one?
Molly  Yes. After I was cast. It was daytime, I was in my hotel room. I turned on all the lights and I watched it.
C.J.  What did you think about the film when you first seen it?
Molly  The only thing I could think was, "Oh gosh, what have I gotten myself into"!
C.J.  You currently play the character "Mandy" on "Last Man Standing". How does that differ from  other projects you have done?
Molly  I think I'm more relaxed doing comedy and I like being able to play a character so much different than myself, so it's been a nice change of pace for me personally. But yeah, it's definitely different from anything I've ever done.  In real life, I'm so much different than the character I play on the show, so it's a challenge, but I love every second of it.
C.J.  What's it like working with Tim Allen?
Molly  Tim is so funny. He constantly has the entire set in stitches! He's so much fun to work with. And I remember watching "Home Improvement" when I was real little. So to be playing his daughter now is almost surreal! 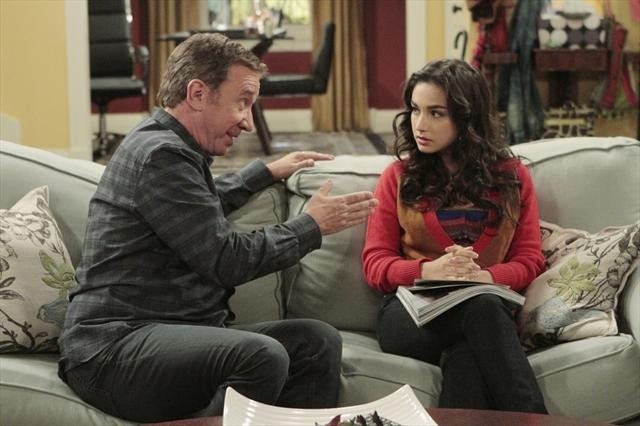 Molly Ephraim with Tim Allen on the set of ABC's "Last Man Standing"
C.J.   You've talked before about how you're very close with your fellow cast members on the show in real life. Do you hang out with them when you're not filming?
Molly  Absolutely, I love those guys to death. But we don't really get to hang out as much as we'd like to. It seems like none of us have very much free time because we're all doing so many other projects. But that means we're working though! So in a lot of ways, not having much free time is a good thing. 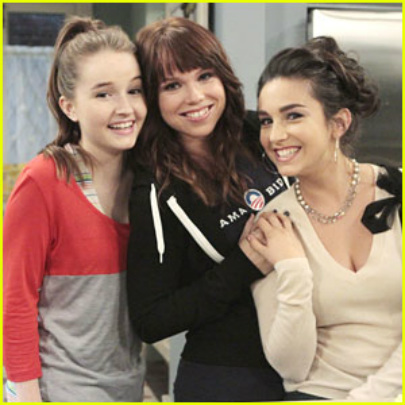 Left To Right: Kaitlyn Dever, Amanda Fuller, and Molly Ephraim of "Last Man Standing"
C.J.  When you do have free time, how do you spend it? What sort of things interest you?
Molly  I don't know, I'm actually very boring! I guess, for the most part, I like to spend time with friends and family and all the people that I don't get to see as often as I'd like to. Other than that, I like to read, watch t.v. and stuff like that. I go to concerts with friends whenever I can. I'm passionate about music and I love seeing live bands.
C.J.  What kind of music are you into?
Molly  Name it! I pretty much like all types. My taste is different depending on my mood. Mainly though, I'm into Nirvana, Soundgarden, stuff like that. I listen to everything, but I guess I'd have to say that Nirvana and Soundgarden are without a doubt my favorites.
C.J.  So mostly, you're a grunge kind of girl, would that be an accurate statement?
Molly  Yep! Through and through! I'm just into those guys who rain emotion you know, and who pour their heart and souls into every lyric and note. That's art. But it's also so much more than that. It's just raw emotion. I don't think anyone does it quite like those guys can. And I'm a total sucker for it! 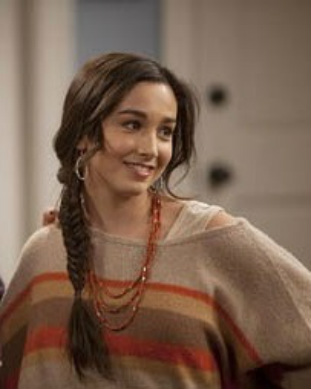 Molly Ephraim- A grunge girl "through and through"
C.J.  Do you have a favorite "feel good" song or a song that you would consider your "theme song"? And if so, what is it?
Molly  I don't really have a theme song. Feel good song? I don't know, "Smells Like Teen Spirit" I guess!
C.J.  You said you like going to concerts and you yourself began as a stage performer in front of a live audience. Do you get a fulfillment from concerts that you miss from performing live? Is there a connection there?
Molly  No, I don't think so. I don't think the two are connected. I mean I do miss stage acting and it's something I hope to do again someday. But going to a punk rock concert gives a totally different energy than acting on stage. For me, it's a feeling of freedom. A feeling of raw energy and emotion. It's a different feeling than what I get from acting.
C.J.   After being in a couple of major films and a successful television series, is returning to the stage a professional goal for you or are you happy with your career as it is?
Molly  Without a doubt, I am completely happy and I love what I do. I get to go to work with lots of people that I truly love. But yeah, I would love to return to the stage one day. I don't know if I'd call it a "professional goal", but it is still something that's in me and it's something I'd like to do again someday.
C.J.  You're a graduate of Princeton University playing teenagers in movies and t.v. Do you ever find yourself wishing you could play roles where you portray someone older?
Molly  No, not really. I'm an actress so I guess if I'm working I can't really complain. Maybe when I'm older I'll wish I could have gotten those roles but I can't regret anything now at this point in my life.
C.J.  One last question; Where does Molly Ephraim see herself in the future, personally and professionally? What do you hope to accomplish in the next year, 3 years, where do you want to be from a personal and professional standpoint?
Molly  You know, I don't really set long term goals. Whether it's in regards to acting or my personal life. I just don't do it. I would hope to continue working, hope that the show continues to be a success, and, I don't know, I just want to continue being happy and I would hope that the level of happiness that I'm at now could stay where it is! I don't know how else to answer that question. I would just hope I could be this happy throughout my career and my life!

Be Sure To Catch Molly In Last Man Standing

Friday's At 9 Eastern Only On ABC